400 meters from the ocean is an unlikely place to find a shipwreck – or so you would think.

Welcome to the story of the Eduard Bohlen! Probably the most INTACT and photographed shipwreck along the entire Namibian coastline.

There were two ships registered as ‘Eduard Bohlen’ the first was sold to the Ost-Afrika line just after it was built and renamed, the second one was a combination passenger liner and cargo ship, and this is the one which we can still see in the Namib Desert. 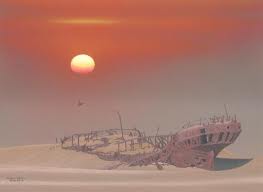 The Eduard Bohlen had a pretty uneventful time of it from her launch in 1890 until 1904, and the start of the Herero uprising in Namibia when German Schutztruppe offered close on 300 male Herero prisoners to a South African labour contractor as workers for mines. The labour contractor accepted the prisoners but refused to pay the customs duty reasoning that as the prisoners were already out at sea they were outside the customs area. The authorities agreed with this reasoning so when the Eduard Bohlen set sail for Cape Town on the 20th January 1904 she technically became a slave ship.

Just as dawn broke on the 9th September 1909, in a thick fog, the Eduard Bohlen hit a sand bank 500m off shore, close to Conception Bay. This 310 foot, 2,272 tonne ship was travelling from Swakopmund in Namibia to Cape Town.

In an attempt to prevent the ship from breaching the captain ordered that the anchor be thrown down  and full reverse on the engines, unfortunately the sand sucked into the engines caused the cooling system to seize.

Fortunately all 30 souls aboard the ship made it safely to shore and reached the diamond digger’s camp at Conception Bay.

According to reports over the next ten days so much sand settled around the stricken ship that you could walk from ship to shore at low tide. This continued until the Eduard Bohlen was completely landlocked. 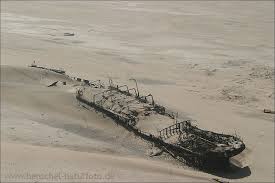 Diamond miners decided this was the ideal location for a hotel and the mine manager was even allocated to the captain’s quarters. It was only when all mining operations ceased at Conception Bay that the Eduard Bohlen was eventually abandoned.

In just more than a century she has effectively moved nearly one kilometer and is a stark reminder that the Namibian coastline is constantly changing.

We all know of the massive strides that Namibia has made in terms of conservation. Not only is it the first country to have included conservation in its constitution upon independence, but it is the only country that has managed to grow its rhino populations to such an extent that…

Franzi joined the team at ATI Holidays as a three month internship to help us during our peak travel season towards the end of 2014. Towards the end of her tenure, Franzi was finally unchained from her desk and we arranged a guided, camping safari to allow her to experience…

Namibia Wildlife Resorts, the governmental organisation which runs the National Parks camping and accommodation facilities, has recently introduced the NWR Enviro-Kidz initiative. This aims to provide opportunities, primarily to school groups from previously disadvantaged backgrounds, to experience the protected areas of Namibia. It is also hoped that they will learn…