Home Blog News Exploring Northern Namibia – through the eyes of a German Intern
By LightSpeed, 20 Feb 2015 Posted in: News

Franzi joined the team at ATI Holidays as a three month internship to help us during our peak travel season towards the end of 2014.

Towards the end of her tenure, Franzi was finally unchained from her desk and we arranged a guided, camping safari to allow her to experience what traditional visitors to our country rave about!

Here are Franzi’s exciting adventures, in her own words!

After a fantastic stay in Windhoek, and before going back to my home country, I was given the opportunity discover parts of the north of Namibia. I was sent on a seven day guided group safari, got the last free seat on the bus and was excited from the start!

First big question for me was, of course, which things to pack. You do not need too much, even if seven days sound very long…it is not. Very important things are a bikini (there is a pool at almost every camping site), a torch (for checking if there are any poisonous insects in your tent…or just for searching for the restroom during the night), sun protection (the sun is very strong, especially in Damaraland and you DO spend a lot of time walking), water bottle (drinking water is available on every camp site and of course in every shop), FlipFlops (hiking boots are important, but for taking a shower or driving in the bus, flipflops are best), and of course a… camera.

With the packing out the way, I just had to wait for the trip to depart!

After an early morning meeting, we set off an adventurous trip began.

After a short drive of 67 km we arrived at Okahandja for a shopping stop at the craft market. There you find loads of souvenirs and if you are good at negotiating… you can even get them for a bargain.

After this short break we went further for our first night at Okonjima. The camping site was beautiful. Every bathroom had a fantastic view over the wilderness and we had the run of the campsite, which was an unexpected bonus. After putting up our tents it was lunchtime. Healthy and fresh salad and hot dogs, everything prepared by our guides, so that we had just to wait for the start signal…Yumm!

After the lunchbreak we got picked up for our afternoon game drive. In a big safari truck we drove to a rescued leopard who was fed in front of us…that was a fantastic photo op.

After this we made our way on to the cheetahs at the AfriCat clinic. En route we were spoilt with game viewing opportunities; Kudu, Oryx, Springbok, Baboons and we even  had some cheetah getting very close and personal with the safari vehicle, they are way smaller than leopards!

At the clinic itself we were shown where injured animals are treated and they explained more about how to adopt a spot of a cheetah. At sunset we left the clinic and made our way back to the campsite. Arriving there, the dinner was already prepared and ready to be enjoyed.

The night was freezing cold, so it was a relief when dawn broke. After packing up our tents and breakfast,we hit the road again. The final destination for that day was Etosha National Park, but our first stop was  Otjiwarongo to refill our waterbottles and for doing the shopping for Etosha. At approximately two o’clock, we arrived at Namutoni on the east side of Etosha National Park. The two hour lunchbreak was used for… well besides lunch… a short visit at the pool and the waterhole at the rest camp.

At four o’clock we left for our afternoon game drive in our own truck. Even if you didn’t have a window seat, it was possible to capture some great animal shots, because of the pop top roof – and we were terribly spoiled… Giraffe, Zebra, Elephant, and even Rhino! 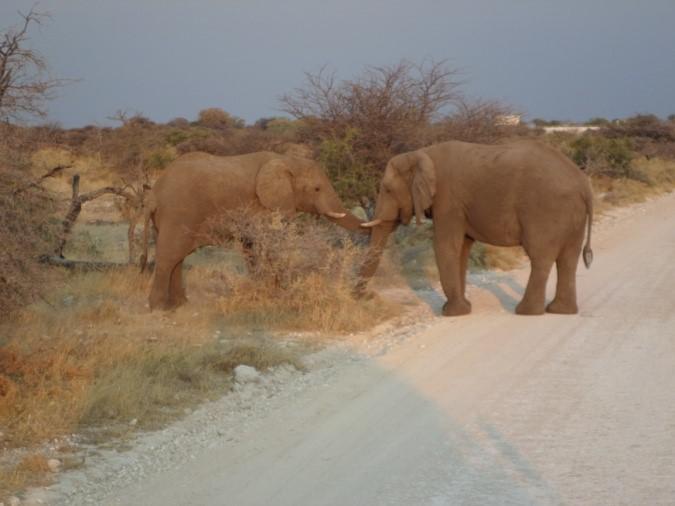 Dinner was a Braai consisting of delicious lamb chops and boerewors (sausage) this evening. Afterwards most of us went to the waterhole for game viewing. The evening ended with a visit of a jackal who wanted to get some food out of the trash bin…

We had an early start, with a 6 o’clock wake-up call, fortunately it had been a lot warmer! At 7h30 we entered the park again and started a day full of game drive through the National Park. We drove from one waterhole to the next, with a bit less luck than the day before. Nonetheless we still saw some animals and got a few interesting pictures. The day was a bit cloudy, not too hot and everybody was a bit tired. At noon we stopped at Halali Camp for lunch. They served Hamburger, very delicious. After that, we jumped in the pool for a little refreshment. 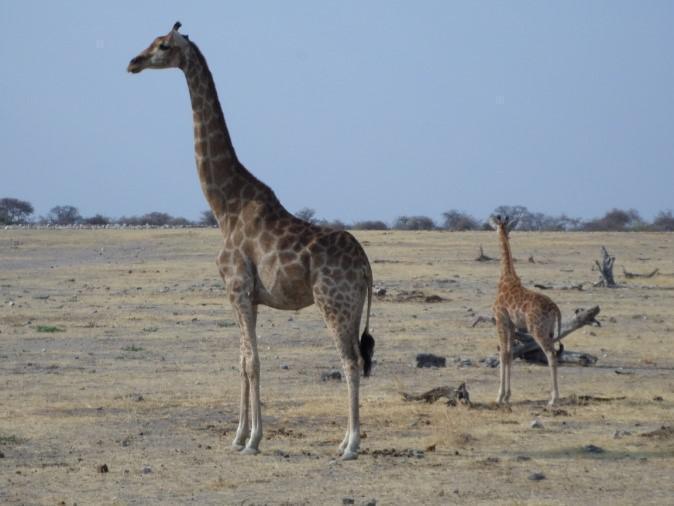 At 15h00 we headed out on another game drive and for our third night stop at Okaukuejo. During our game drive we were able to see three lionesses at a waterhole. Just before sunset we arrived at Okaukuejo. It is very well-maintained and looks like a little village. After putting up our tents we had the chance to watch animals at the waterhole before dinner. When everybody returned from the waterhole and dinner was served, an employee from Okaukuejo came running and told us that there was a lion at the waterhole! 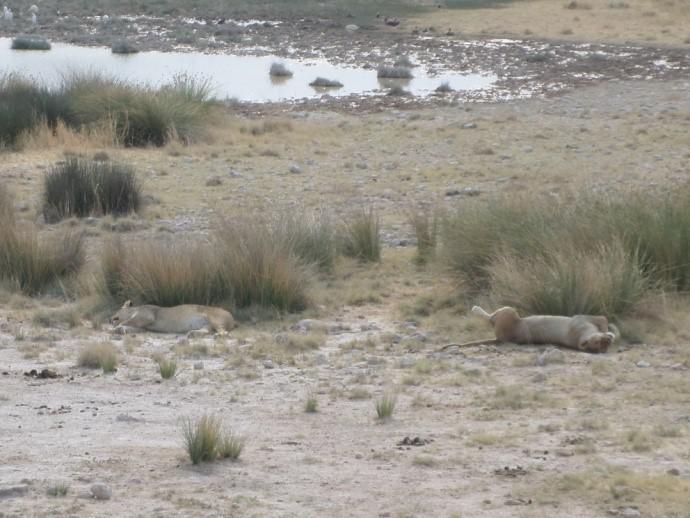 The entire rest camp took off to the waterhole for an opportunity to see the lion, but seeing as we had already been spoiled with our lion viewings, we stayed and enjoyed the silence and our supper! Just as we settled in for the night the silence was shattered by the roaring of the lions – definitely an adventure!

Namibia is definitely a country of early starts and after a full english breakfast we left Etosha in direction of Outjo. Just before the exit of the park at Anderssons Gate, the lionesses were there to bid us a fond farewell

Most of the day was spent in the truck, after a quick shopping trip in Outjo, we had lunch near Kamanjab – the landscape was definitely changing from savanna scrub to a much ore rocky terrain. A few more stops for souvenir shopping before we arrived at a himba village. A local guide took us through this traditional village. The himbas there are able to keep their traditional life and their habits. To be honest it was a weird feeling to photograph these people…I felt like in a zoo, but they were very nice and used to being photographed. The most I liked the little children, who were very cute. We had a lot of fun playing with them. 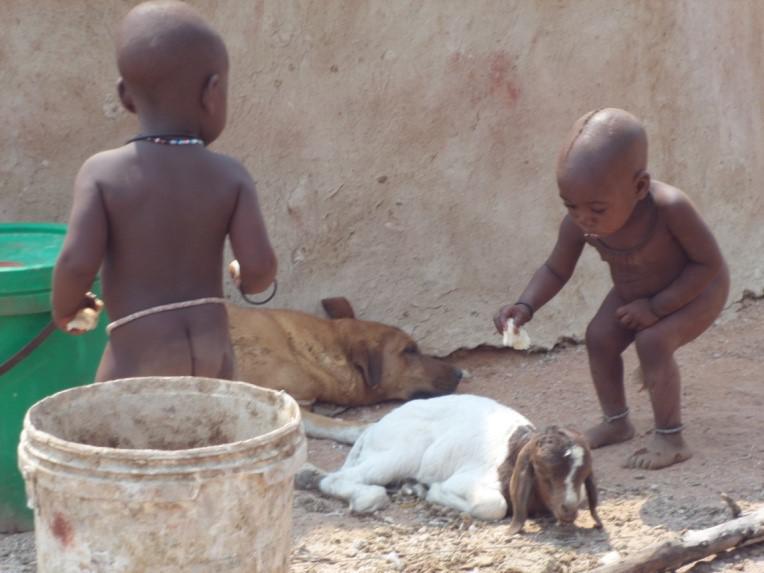 In the early evening we arrived at Hoada Camp. Hoada is sourrounded by huge rocks and red sand. The pool was on top of one of those rocks. Even the bathroom was built in the rock.

The activity of the day was a visit of Twyfelfontein. On our way we went over the Grootberg Pass; a very scenic place. High mountains appear on the horizon and the view from the top is just awesome. 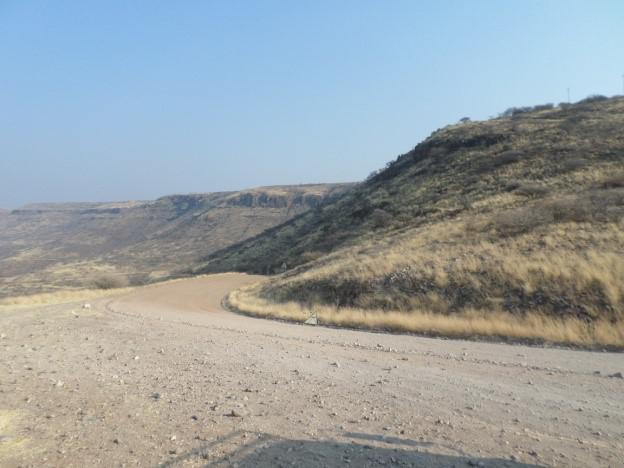 We arrived at Twyfelfontein in the midday heat. Immediately the tour through the rocks began. Our guide told us a lot about those old rock engravings. The San made these engravings for groups of people that may have come after them, to show which animals have been found in this region. These etchings and engravings are estimated to be between 2 and 6 thousand years old. 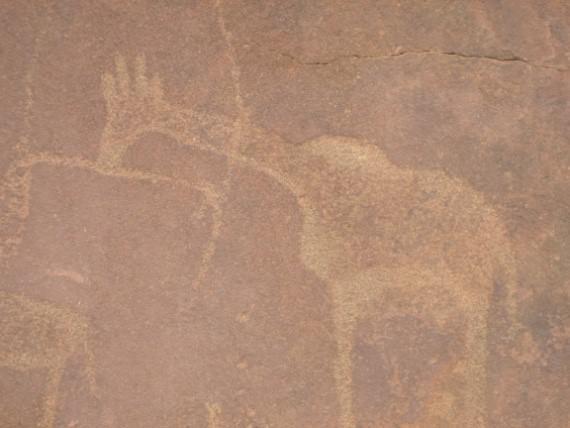 After a packed lunch under the shady trees, we proceeded to the nearby Camp Madisa for our next over-night stop. Arriving at Madisa, a beautiful campsite surrounded by rocks, we put up our tents and went straight to the pool. We spent the rest of the afternoon in the pool. It was so hot that this was the only refreshment that helped.

Before sunset we climbed on one of the huge rocks to enjoy the sunset and for took the obligatory some photos.

The dinner was served after this beautiful sunset and was delicious as always.

Some of the girls started the day very early and went boulder hopping to watch the sunrise. 6h30 the rest of the group got up and put the tents back in the truck.

After a healthy breakfast we started our drive to Swakopmund. First stop was Uis and after 400 km we finally reached Cape Cross and the Seal Colony. Cape Cross is in the iconic Skeleton Coast and is home to about 100,000 seals. 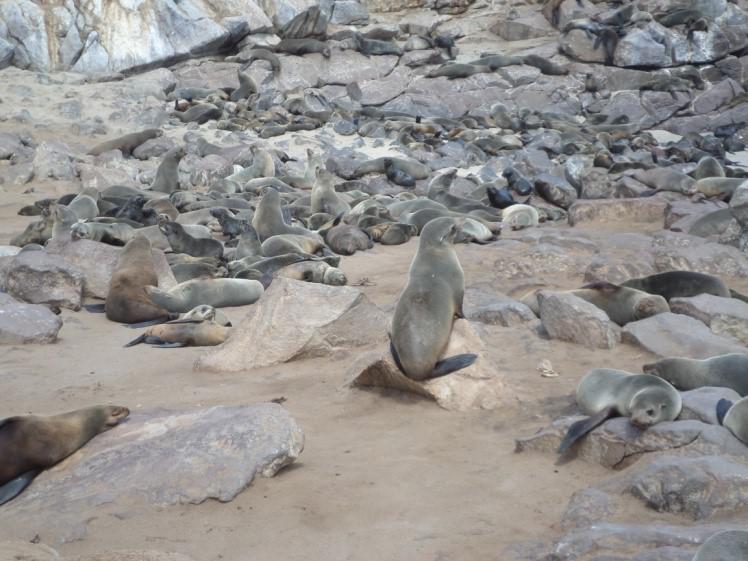 After lunch we arrived in Swakopmund, where we were checked in at Amanpurij Travellers Lodge. It was freezing cold when we left the truck. Everybody got their own en suite bedroom, very luxurious after 5 days of camping, but a bit lonely as well, I had gotten so used to sharing a tent with someone. We had ample time to explore the town and the beach. before meeting up for dinner at Kückis Pup.

The dinner was great and we had a lovely last evening together. Late in the evening we returned to our Lodge. 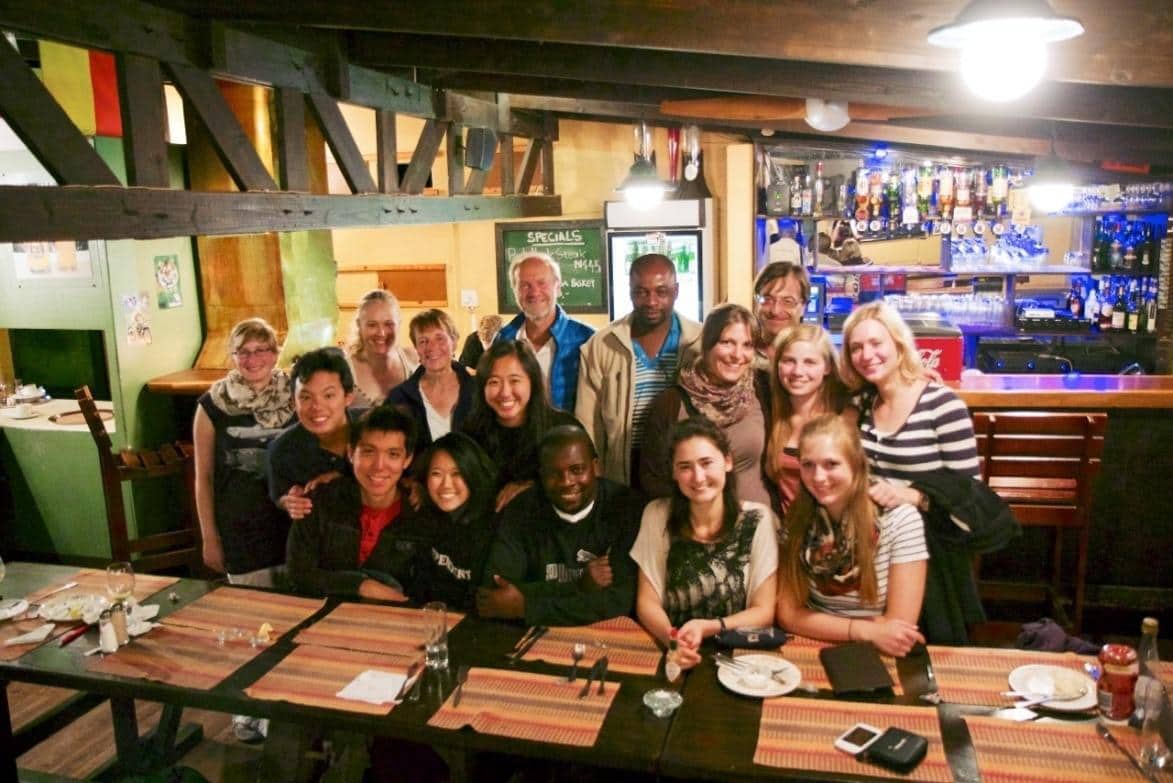 After a wonderful luxurious night in a proper bed, we got up for an early last breakfast. Some of us left for some activities in Swakopmund like quad biking or living desert tours. The rest of us kept on exploring the city. We visited the aquarium and the sea side and after spending too much money for souvenirs, we made our way back to the lodge for lunch. There we met the other part of the group again, which was telling us all about the activities they did…

At 2 o’clock most of us got picked up and were taken back to Windhoek. There we arrived in the evening, said good-bye again and were dropped off at our guesthouses.

Summarizing these 7 days it is to say that Namibia is such a beautiful country. The most fascinating thing for me is the diversity of landscapes and animals. I really loved the rock engravings at Twyfelfontein, but Namibia offers interesting things for every type of tourist. The guides were very professional and helped us were they could. I really  took all these wonderful memories back with me to Germany and I will keep them until I come back to this beautiful country.

This Annual Report regarding the lion conservation efforts in the Etosha region is reproduced from the latest AfriCat Newsletter, the Cat's Whisper. The AfriCat Hobatere Lion Research Project has gained momentum and now boasts seven lions fitted with GPS-Satellite collars (4 males and 3 females). We have been able to…

When you think of Africa and its incredible wildlife you almost inevitably conjure up images of endless plains, scattered with antelope huddling together under the deceptively disinterested gaze of the ‘king of the beasts’. It may then surprise you to learn that Namibia is also home to more than half the world’s population of Cape Fur Seals. A population of approximately 1 million these intelligent and gentle creatures grace the cold Atlantic coastline of this desert dominated country.