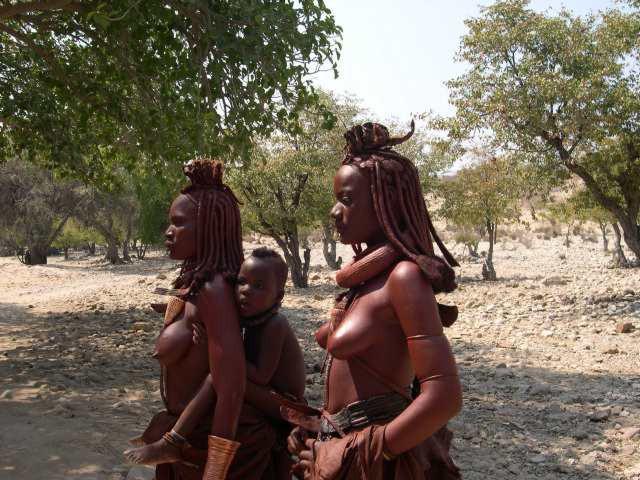 The Himba Tribe of Southern Africa, the very name conjures images of a statuesque, ochre-coloured peoples who inhabit some of the most desolate and arid regions of Namibia.

Here we look a little deeper into the Himba belief system and customs.

The Himba are of Bantu heritage, and there are only approximately 10,000 Himba left. They live in an area that is about the same size as Belgium.

The Himba are, historically speaking, distant cousins of the Maasai, and migrated to Southern Africa many centuries ago. In the 15th & 16th centuries the, accompanied by the Herero, they started crossing the Kunene River into Namibia.

The Herero were greatly influenced by the German missionaries, who came to Namibia in the 19th century, and this has moulded their traditional dress, however the Himba remained largely untouched by Western influence.

It is only when the Himba settled in the Kaokoland (meaning ‘faraway land’) region, that they had to adapt to the continual strife around them and become hunter gatherers, which is seen as a humiliating occupation for these pastoralists. In fact, the term Himba actually means ‘Beggar’

During the 1970’s the Himba become the most prosperous pastoralists in Africa, but this abundance was short-lived, when, during the 1980’s drought and war struck the Namibian/Angolan border and 90% of the Himba cattle died.

Since the 1990’s and Namibian independence there has been a resurgence and the Himba have benefitted greatly from the increased tourism and community conservancies in the Kaokoland (Now Kunene Region of Namibia) meaning that they can now earn an income from the wildlife that previously competed with their livestock for resources.

The Himbas’ characteristic red tinged skin comes from the mixture of ochre and animal fat called ‘otjize’ that they rub on their skins. This helps protect from the sun, insects and is rubbed into the hair and clothing as well.

The Himba practice ancestor worship and maintain the sacred fire ‘okoruwo’, which is always kept burning and considered to be a vital link between the living and the dead. The Himba have a monotheistic belief system, but their god is distant and all communications have to take place through the spirits of their male ancestors.

The headman of the tribe will sit at the okoruwo and talk to the ancestors about the problems that they are facing.

At night, the Headman’s wife takes an ember from the okoruwo into the hut, and the next morning this is used to rekindle the sacred fire.

This fire is one of the most sacred aspects of the Himba belief system and strangers are not allowed to walk between the okoruwo and the headman’s hut, nor may they walk between the cattle kraal and the sacred fire.

Another feature of the Himba kraal is the fact that the headman’s hut is the only one that has its door facing the fire; all other huts are built with their doors facing away from the okoruwo.

The Himba live in harmony with their livestock, so much so that when they milk their cattle in the morning, they will only milk from two teats of the udder, allowing the calves to drink the milk from the other half of the udder.

The cattle are usually only slaughtered at a ceremony, and married men eat meat that is kept separately for them.

Marriage in the Himba community is seen as a way of spreading wealth, and women will move to their new husband’s village after marriage.

Both Himba men and women can have multiple partners and the men can have a number of wives on different homesteads. However, within these relationships there are very strict rules.

When a child is born it is named for both the maternal and paternal lines, and lives with the mother until three years of age.

After this it will go live with its siblings, and will be taken care of by all the family members in the homestead.

At the age of 12 the bottom four incisors are knocked out, as this is believed to protect the child and at this point young boys are circumcised and girls have a coming of age ceremony.

When a Himba dies, the body is wrapped in cattle skin and the body is placed next to the sacred fire, for about a day, during which time cattle are slaughtered. Once the body is ready for burial it is taken far away from the homestead. The horns of the slaughtered cattle are placed on the grave – for a man, the horns point upwards and for a woman they are placed downwards. The more horns there are on the grave, the wealthier the person was.

Once the body has been buried, the tribe returns to the homestead for a second period of mourning, which lasts for about a month

When visiting a Himba settlement it is always wise to remember that this is their home and one should adhere to their beliefs and customs.

If you are looking for something just a little bit different, why not consider a few relaxing days on a floating luxury lodge? The new Nguni Zambezi Voyager offers the perfect base from which to explore this diverse region with game viewing, birding, fishing, cultural visits and relaxation the order…

Earlier this week Namibia's capital city, Windhoek, had a cloud burst like I haven't seen since I was a little girl, call it better drainage, better contruction or a change in weather patterns, but I remember growing up and every rainy season you would have at least one neighbour whose…

We all know of the massive strides that Namibia has made in terms of conservation. Not only is it the first country to have included conservation in its constitution upon independence, but it is the only country that has managed to grow its rhino populations to such an extent that…