Home Blog News Rhino Trekking in Namibia – Save the Rhino Trust and Wilderness Safaris in the Heart of the Kunene!
By LightSpeed, 7 Oct 2013 Posted in: News 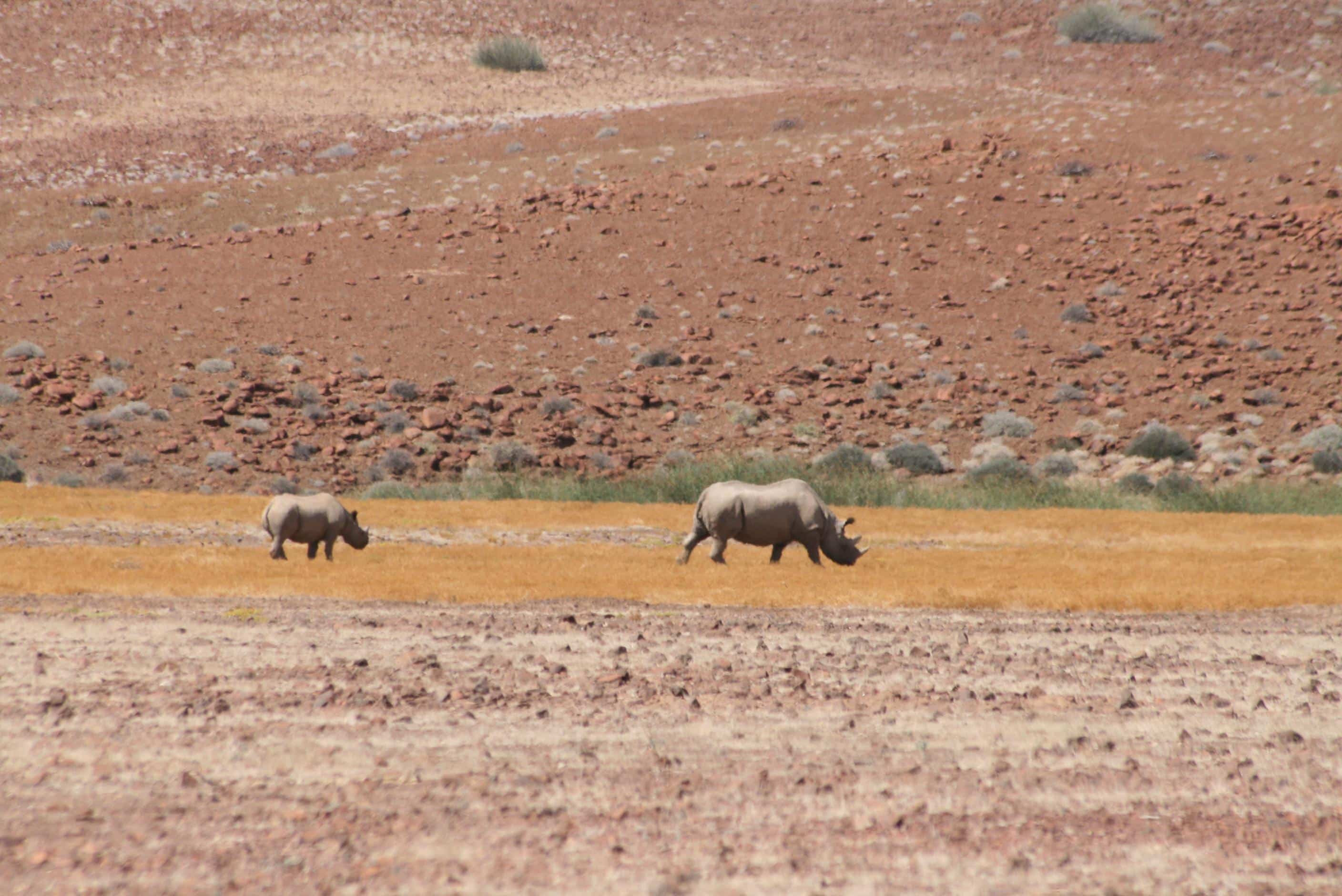 Our guide suddenly stops and whispers that he sees movement. We slowly get out of the vehicle and follow our guide on foot. No more than 50meters from us, she breaks from the cover of the bushes. She is suddenly bigger than I imagined. A rustle next to her and then there are two. Next to her comes her smaller replica… rhino cow and calf stand staring at us, waiting.

The moment has been etched into my brain. It was December 2010, a year that had left South Africa 330 short of these magnificent creatures. 2011 and 2012 proved to be worse. By now, the rhinos are in serious trouble of becoming extinct. The poaching is no longer only South Africa’s problem. An international Chinese market for alternative medicine is proving to be very lucrative while African governments struggle to keep corruption at bay.

Here in Namibia we have escaped the worst of it, but the recent increase in poisoned animals has alerted authorities. Our animals are in danger and they need protection. Like in so many of the cruel deaths of animals, local myths and beliefs play a magnificent role. The myth that vulture brains can make one see the future (win the lotto), that rhino horns possess healing powers – these are a reality for many rural Africans and the only way to win this is by education from a very small age. But is it too late in fighting for the right of generations to come to see rhinos in the wild?

The pure expanse of Namibia, the often inaccessible areas where rhinos are found and the dedication of both ranger and local are certainly factors adding up on the positive side for Namibia. On the negative side, we too have an alarming increase in illegal foreigners in the country – people who do not share our love for this beautiful country and its amazing animals. As long as our governments turn a deaf ear to conservationists and open their pockets for illegal money affairs, our animals will be in danger. In the meantime, the rangers, lodge owners, conservationists do everything possible to protect our rhinos and endangered species. All over the social media you will find references to Namibian projects – people putting themselves out there to save whatever the costs.

Two such projects are Save the Rhino Trust (SRT) and the AfriCat Foundation. These projects work hand in hand with safari lodges – every time a guest books at the lodge, a percentage goes to the funding of the project. Of course working with lodges also has the benefit of educating the guests. Some, like Okonjima where AfriCat is based, even have education centres. Okonjima, located 50km south of Otjiwarongo, takes about 40 children a month. SRT is located in the vast 10,000 square miles of Desert Rhino Camp Reserve (A Wilderness Safaris Lodge). Here you have trackers of the SRT to take you out on foot to view rhinos. These same trackers also monitor the movement of rhinos in the reserve – keeping a very close lookout for poachers. Wilderness Safaris also works closely with the communities surrounding their lodges. This ensures trust and education.

Looking at the various conservation projects in Namibia and the work they do in the local communities, it is evident that we have started the fight against illegal hunting well before the escalating poaching in bordering South Africa. Animals in Namibia have a fighting chance to survive with informed locals and international funding. The end is by no means in sight, but supporting a cause has never been more important than now.

Tomorrow sees one of Africa’s youngest nations celebrating 25 years of independence. This morning my usual 15 minute trip to work took about 45 minutes; the roads are congested and there is an almost electric excitement right throughout the capital city today. Sitting at my desk, listening to the fighter…

If you are looking for something just a little bit different, why not consider a few relaxing days on a floating luxury lodge? The new Nguni Zambezi Voyager offers the perfect base from which to explore this diverse region with game viewing, birding, fishing, cultural visits and relaxation the order…

Kolmanskop, the deserted town in southern Namibia, where the diamonds once, quite literally, paved the streets, has just announced that visitors no longer require taking a guided tour when they arrive at this famous Namibian tourist destination. Instead they are welcome to pay their entrance fees, and take a self-guided tour through the hamlet.