We had a long drive from Vic Falls through to Mazambala Lodge but we still lingered over the champagne and orange juice, eggs benedict, chocolate croissants and fresh muffins.  It seemed churlish not to enjoy this magnificent breakfast to the full.  Leaving Zimbabwe was a lot easier than entering, although not without the predictable request for a ‘Christmas present’.

We encountered a particularly sullen and rude border official coming into Botswana again, there are a number of foot and mouth disease checkpoints through the Caprivi and into Botswana, but she was the only person to insist that we rummage through our suitcases to wipe our spare shoes on the mat as well as the ones we were wearing.  She then insisted that we open everything else in our car while she chatted to her mate on the phone, presumably looking to see if we had anything for her ‘Christmas present’.  Finally, after 4 border crossings, we were back in Namibia.

We spent one night at Mazambala Island Lodge, en-route to Divundu.  The rain came down again, but there was an opening in the clouds for us to try a spot of fishing from the jetty while drinking our G&T’s and watching a hippo shaking his ears nearby.

The following morning we were off again, to spend the next two nights at River Dance Lodge, around 30km from Divundu on the banks of the Okavango River.  This is the water source that feeds the vast Okavango Delta, the World’s largest inland Delta that meanders through channels and swamps to finally filter into the sands of the Kalahari Desert.  The rains have only just started, but even over the two days we were there, we saw the river level rising as the water flowed down from the Angolan highlands and was swollen ever more by the local rainfall. 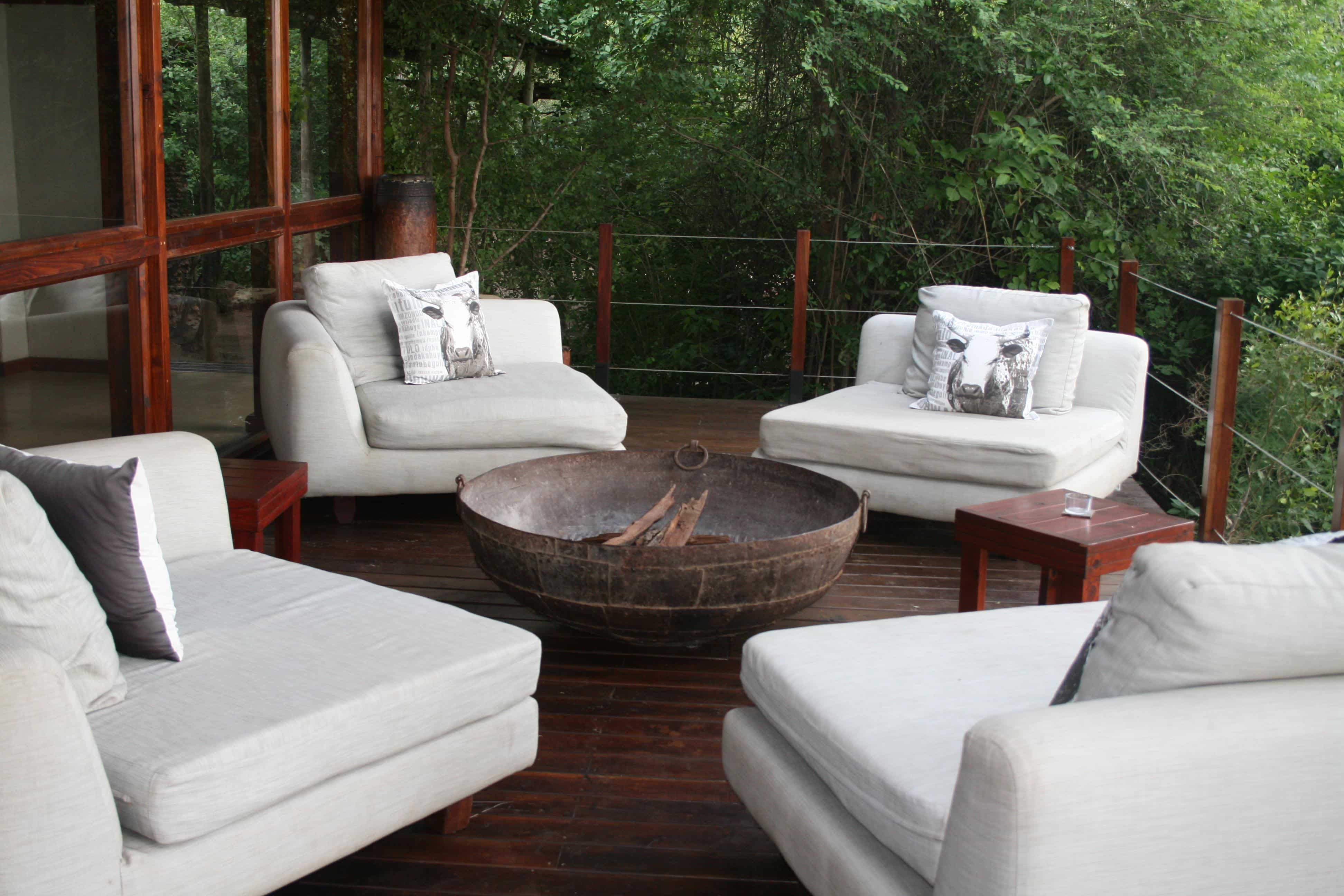 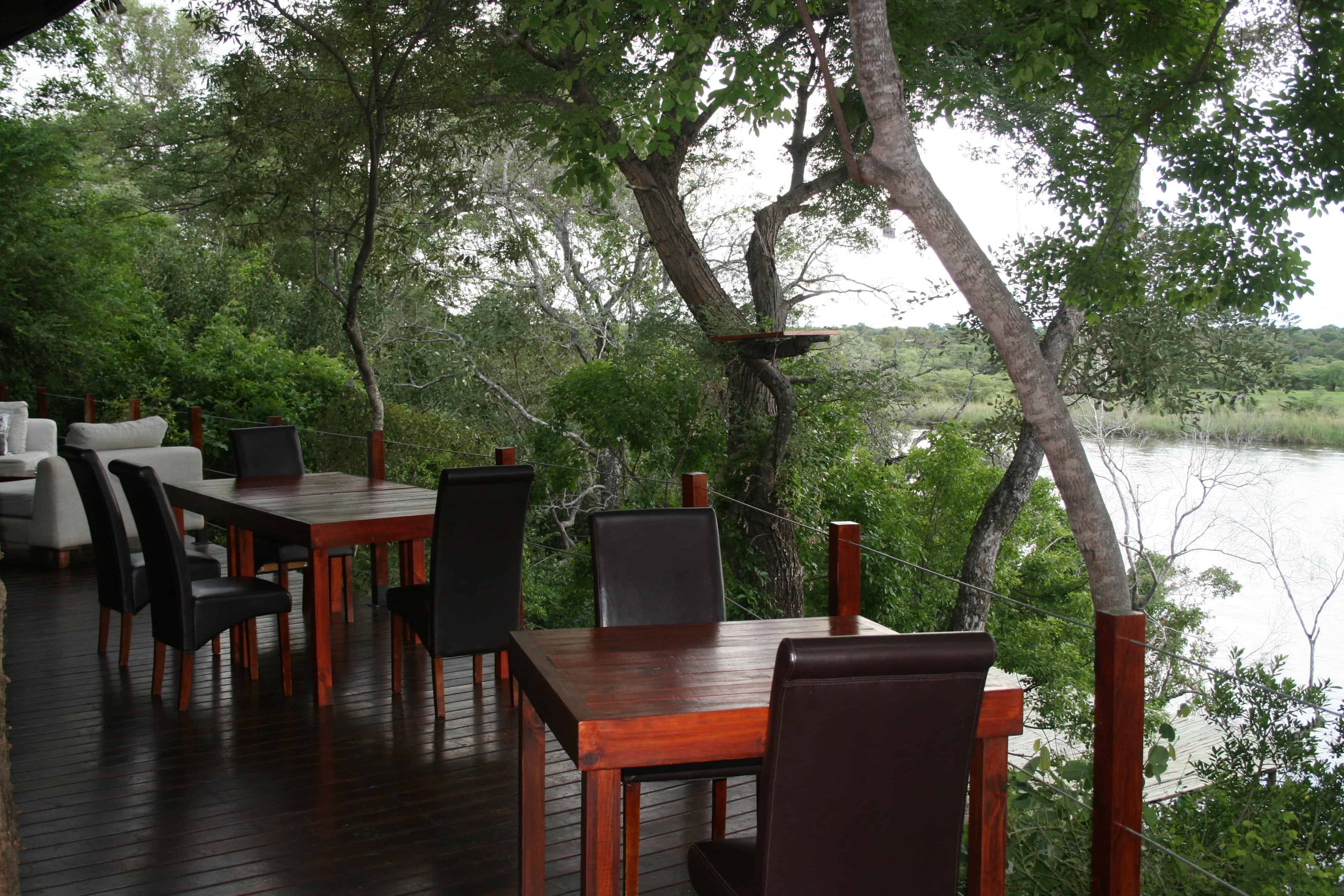 The 5 chalets at River Dance are beautifully designed wooden structures perched on top of the riverbank.  The bathrooms are separate cabins, a short distance from the room across the raised wooden deck, and all have a shower and a bath overlooking the tree line and the flowing river.  Activities are all based around the river; boat cruises, village walks, fishing trips and an island nature walk.  We enjoyed a mornings fishing trip, once again a big tiger fish bit and jumped, but twisted itself off the hook and back into the river, this was not to be a holiday for big fish boasts but rather for just enjoying floating along on the current and watching the birds. 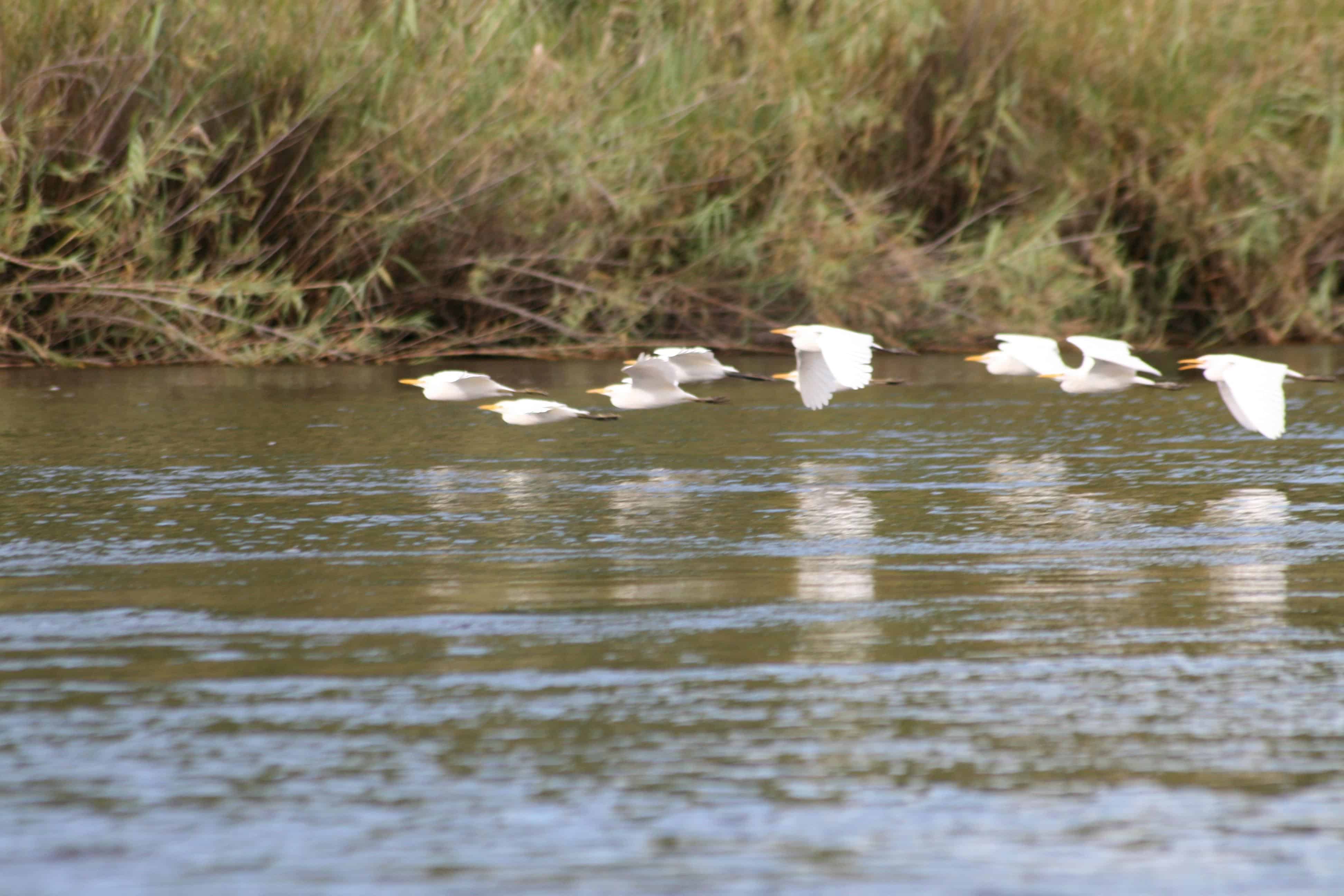 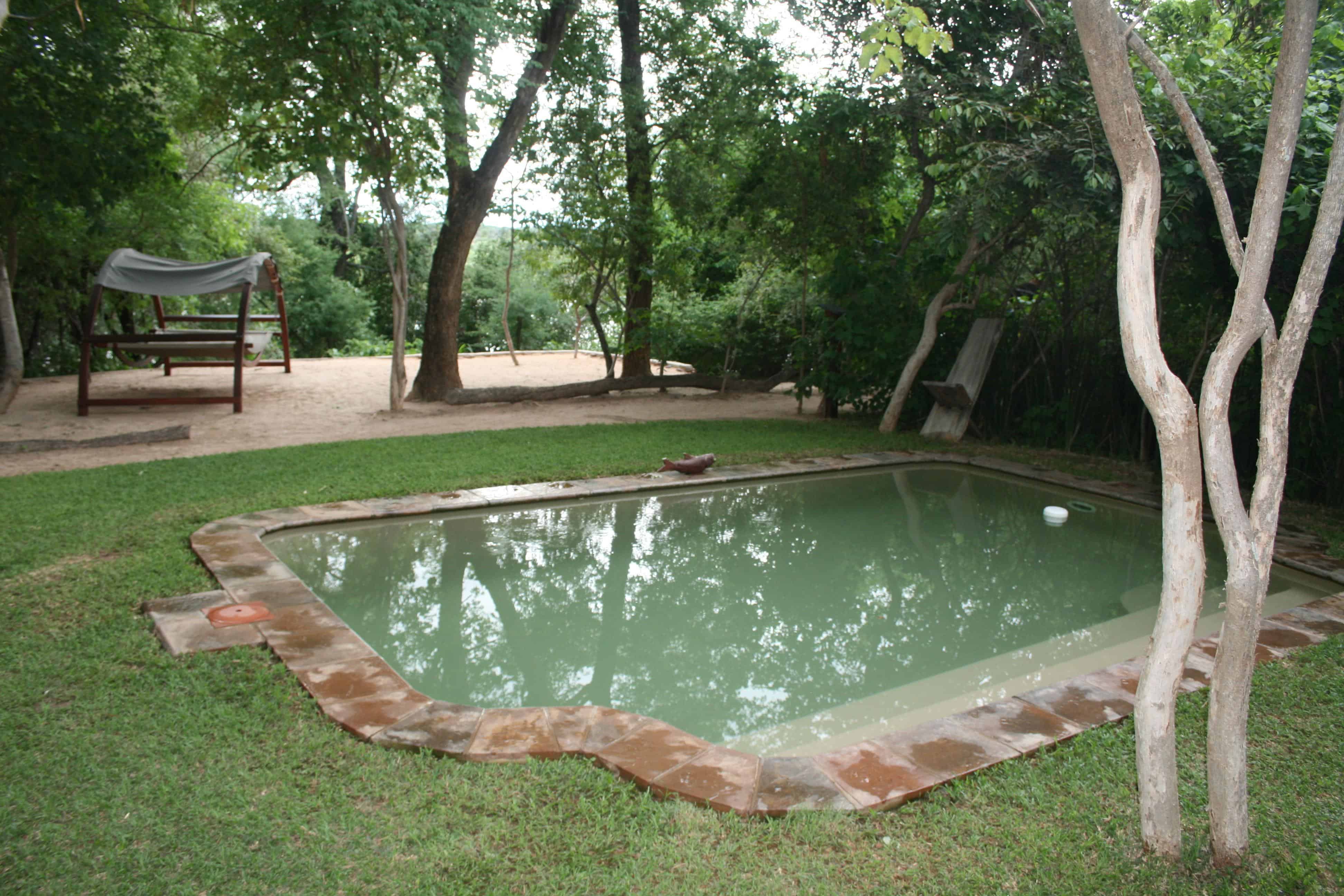 After lunch we sat in the lounge and relaxed, a big pot of tea, a game of Uno and a good book.  Jasmine found a new game to pass the afternoon – curling tshongololo’s (giant millipedes), touching each one and watching it curl into a tight spiral.  The pathways were full of them, so this entertainment kept her busy for some time.  Later, as the boys played cricket in the car park, Karin showed us a nest of tiny sandgrouse chicks, just hatched that morning.  Later that evening, after the staff had danced and sung around the fire, the termites returned, seeming to follow us through our holiday along with the rain.  This time at least we had a bathroom ceiling, but eating dinner in the dark was interesting.  Luckily the food was fantastic! 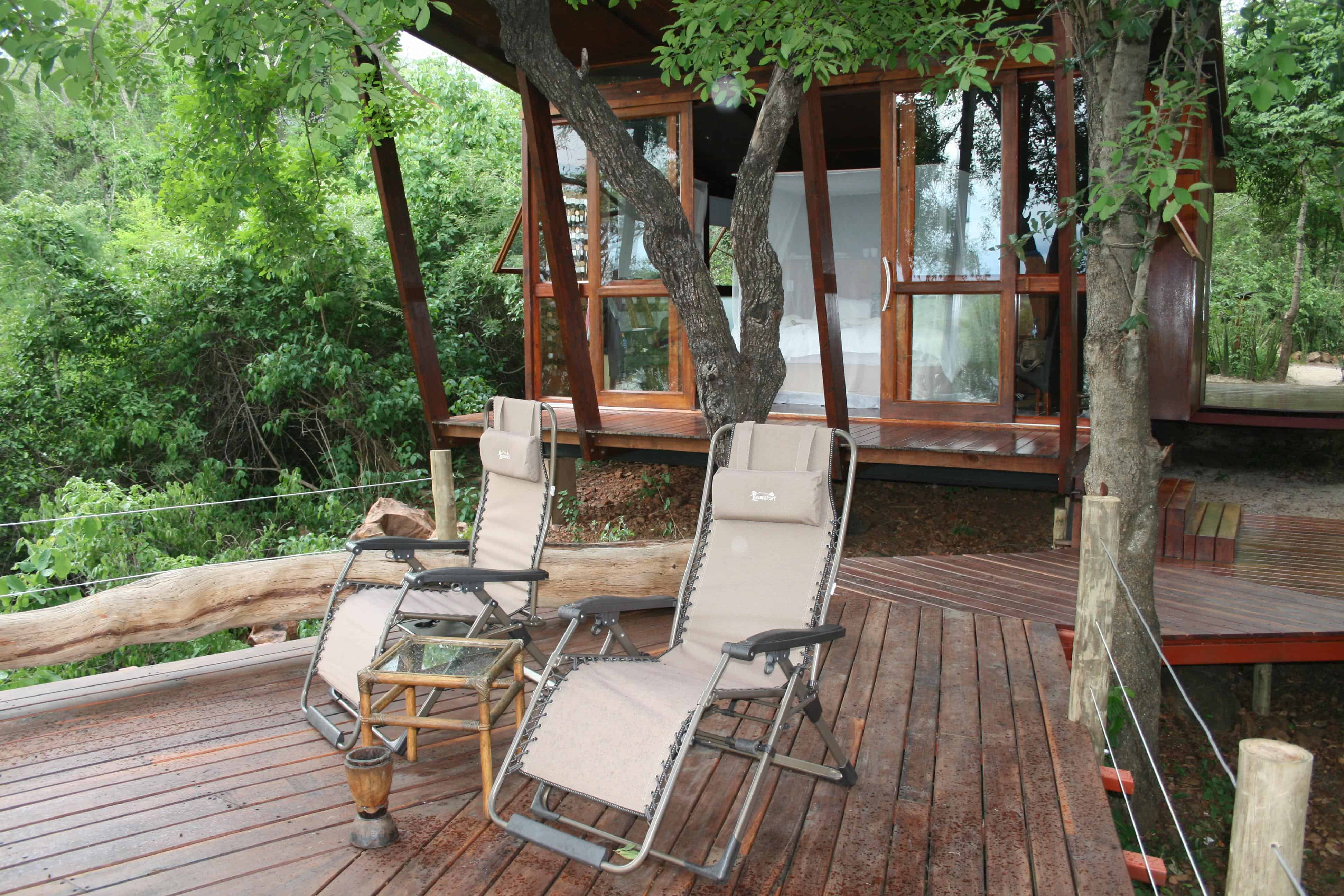 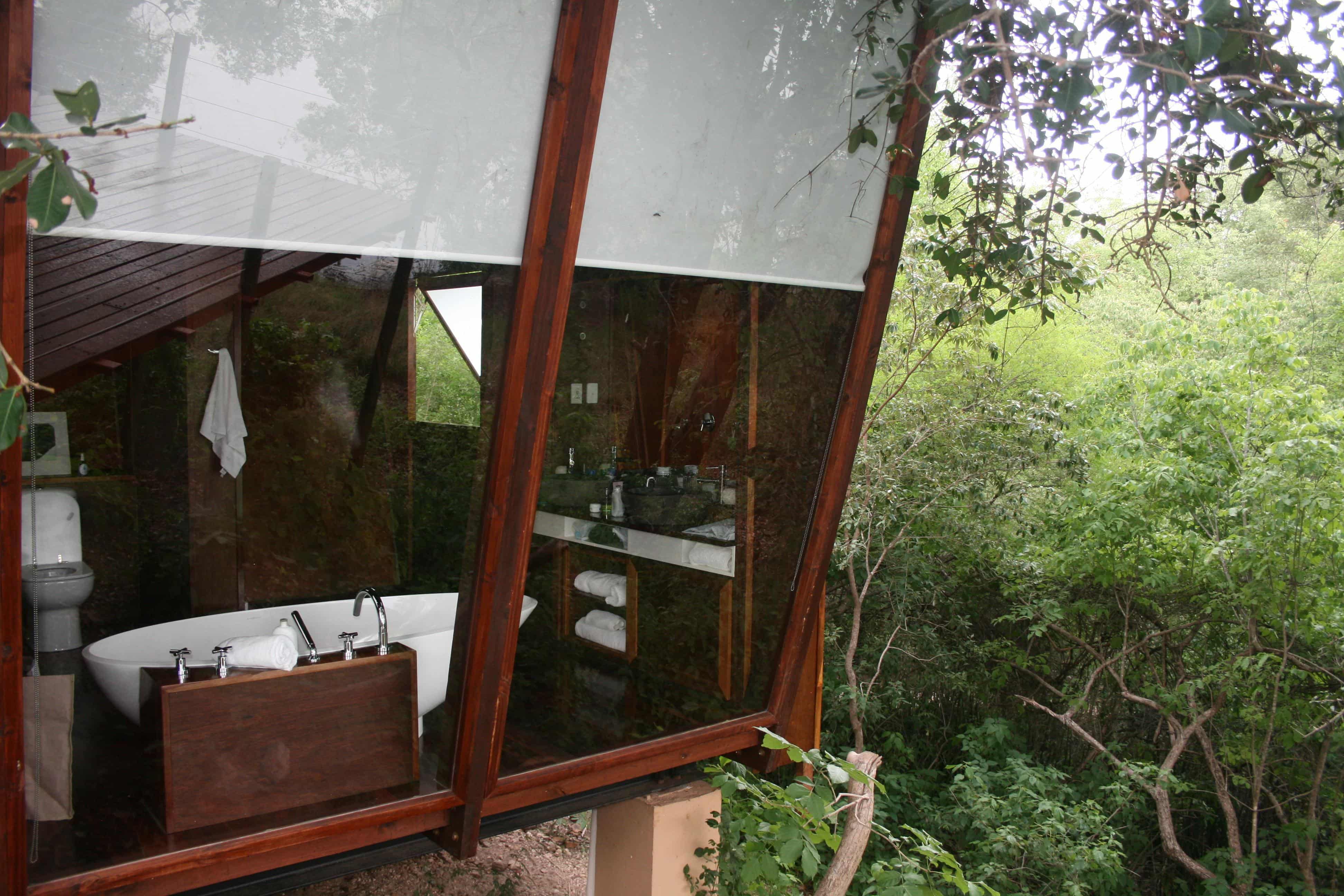 Leaving the river behind, we headed southwards on our epic journey back to Windhoek.  We had one more night of holiday left, and after a 6.5 hour drive we arrive at Okonjima Lodge, the home to the AfriCat Foundation.

There are four lodges at Okonjima, the original Main Camp which is currently being extended and upgraded to what will be Plains Camp from January 2014.  This is the most affordable lodge, then there is the luxury Bush Camp with open chalets and a bush feel.  The Bush Suite offers luxurious exclusivity with two en-suite bedrooms, the superb Villa has four bedrooms and both of these have a private guide and chef.  We stayed at Main Camp, this is the only lodge to accept children and they are geared towards a family-friendly experience. 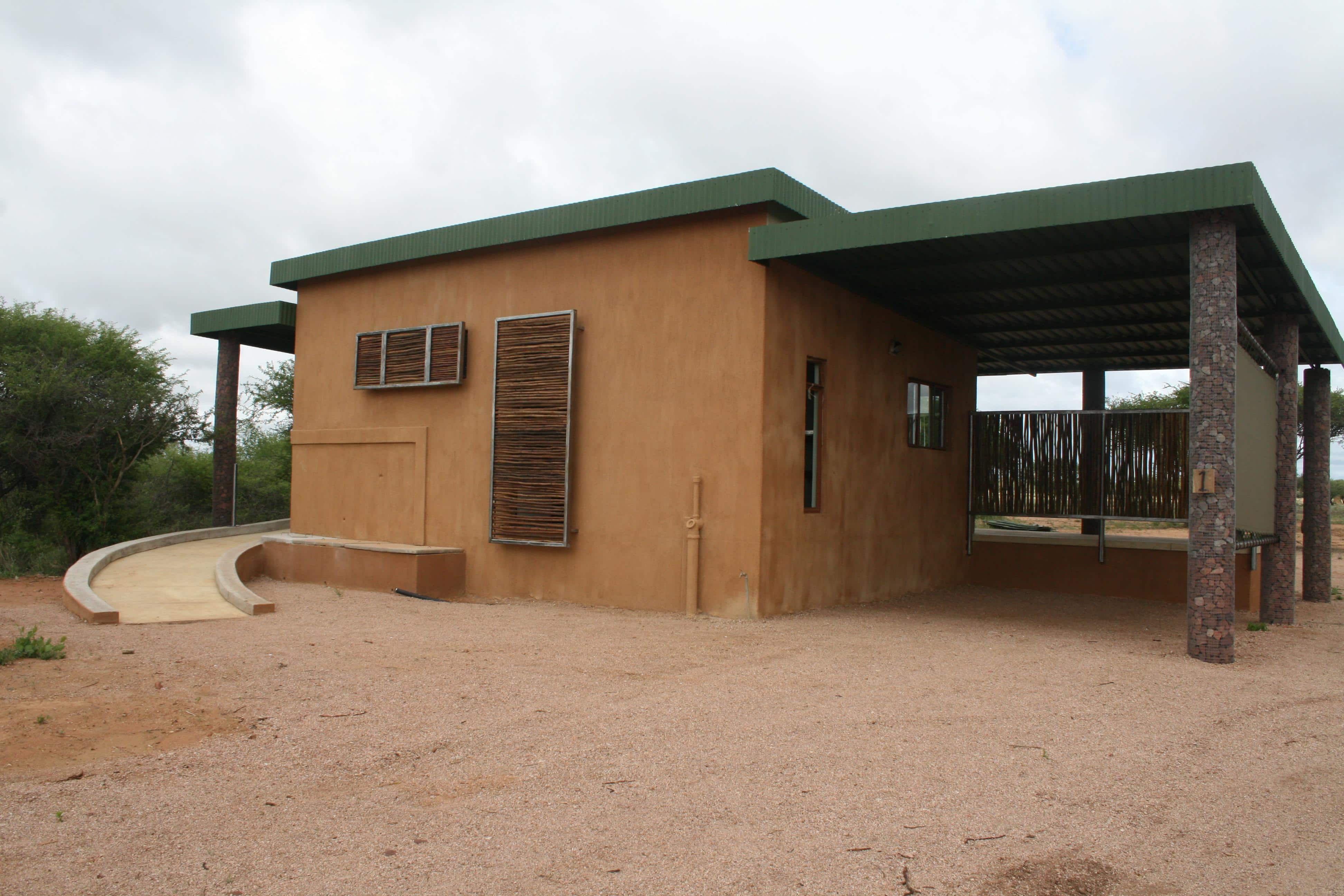 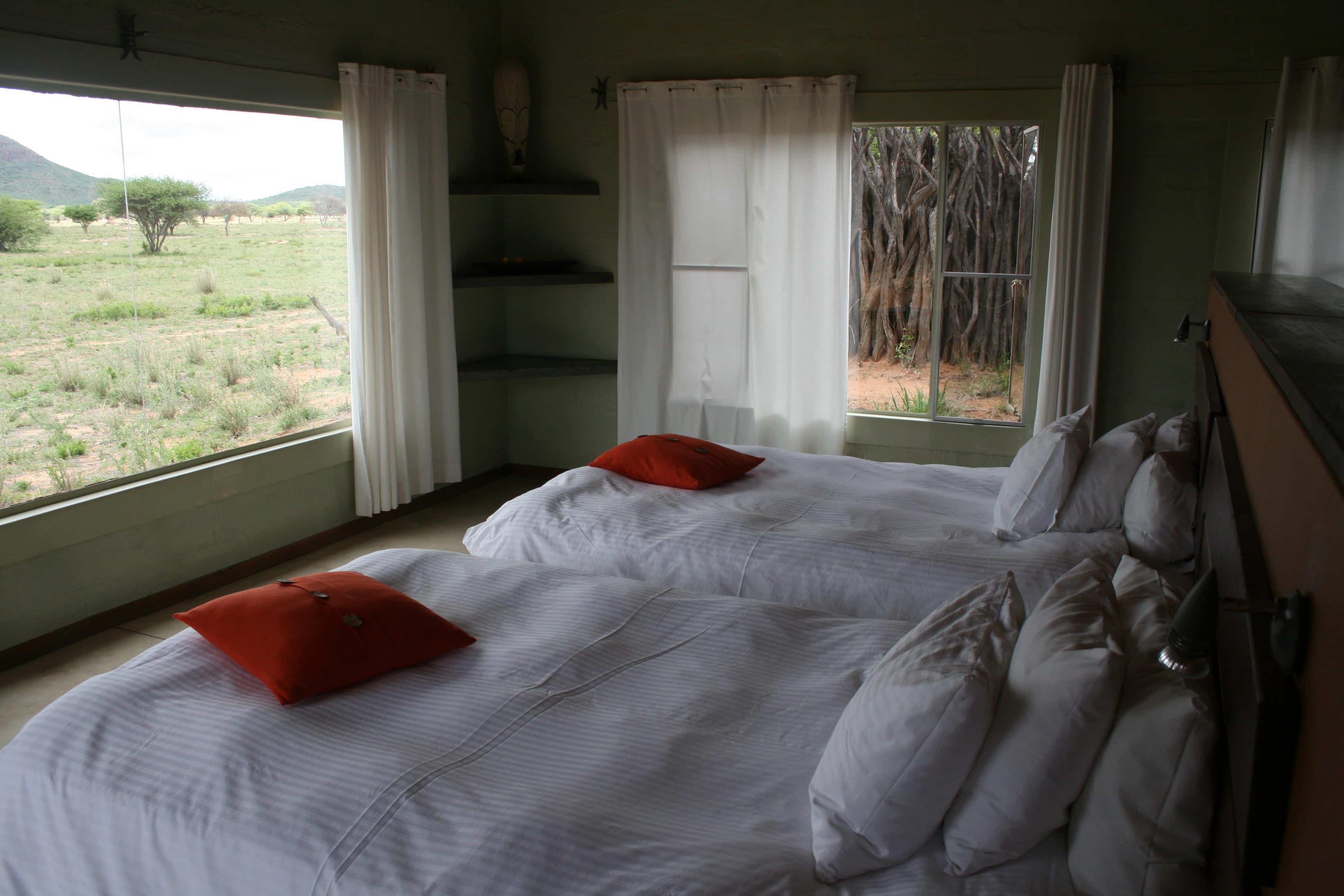 The educational centre now has a new purpose built clinic paid for by a legacy left to AfriCat.  Day visitors can have lunch at the Day Centre and then proceed to the Educational Centre for a tour and to see the few cheetah who were raised as pets and are un-releasable, they now act as ambassadors for their species and offer a good opportunity for visitors to see them close up and learn about the challenges facing them.

We had the last early wake-up call of our trip at 05h30, and went out leopard tracking after a quick cup of tea and muffin.  There are around 35 leopards in the 20,000 hectare reserve, 9 of which are collared.  Most of these are now used to vehicles, but some are shyer than others.  Finding a leopard is by no means guaranteed, but the guides have telemetry equipment and track specific leopard that they know are in the area, so the chances are very good.  We were lucky saw a female, ‘Electra’, and her two young cubs which was a fantastic sighting – we first found her and one cub sitting astride a fallen dead tree in a sandy riverbed.  We stayed with them for half an hour or so, and they moved between the tree, a stashed kill underneath the bushes, and the riverbed.  The cubs were cheeky and extremely cute, they ticked all the playful kitten boxes, and their long suffering Mum alternated between lovingly washing them and flicking them away from her snack with a low growl when they got too close.  It was certainly the best leopard sighting we have ever had.  Yes, it is a little contrived because they are collared, but they are still wild leopard and hunt for themselves, and the reserve has a feeling of wilderness to it which the smaller areas never used to convey before the 20,000 reserve was established. 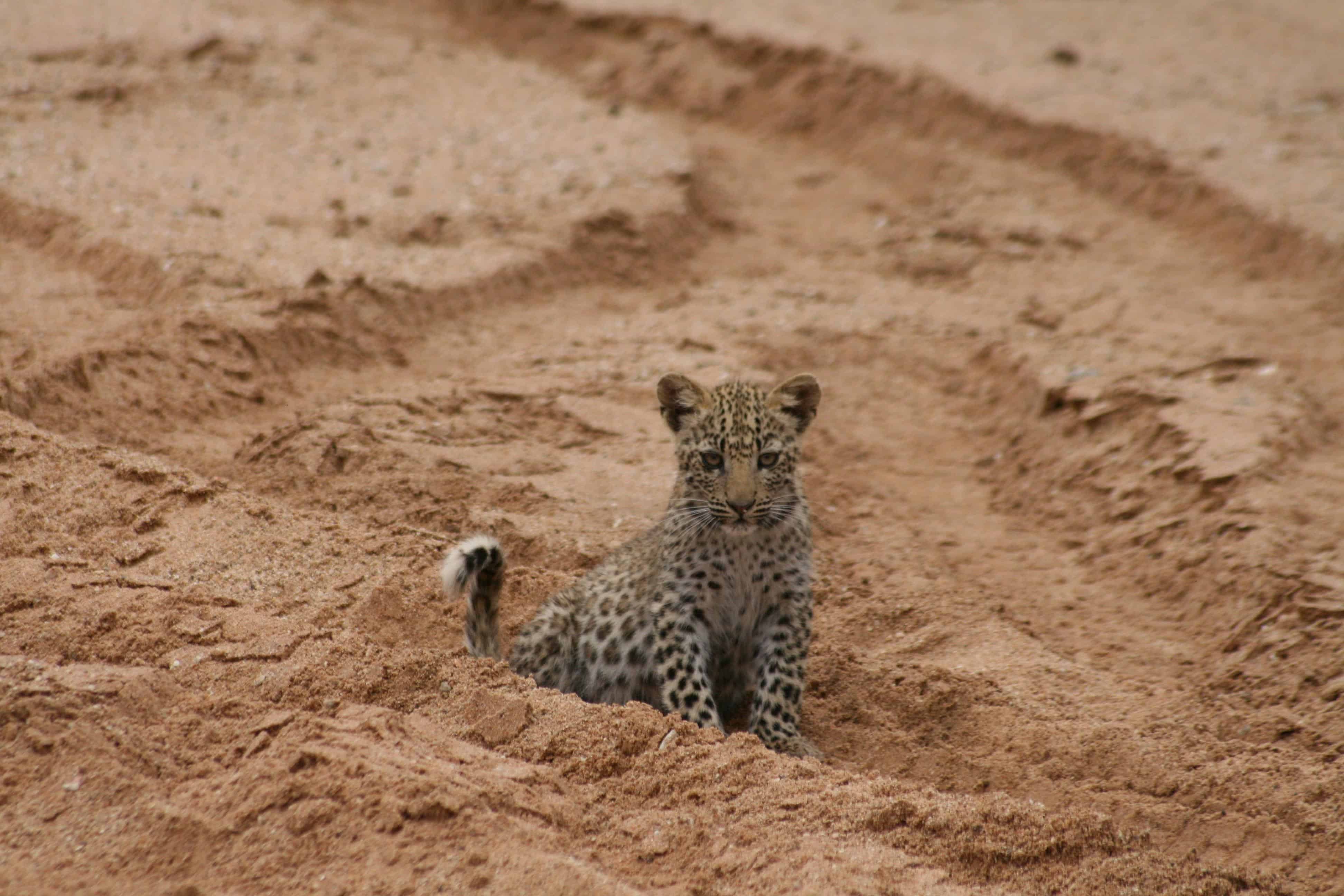 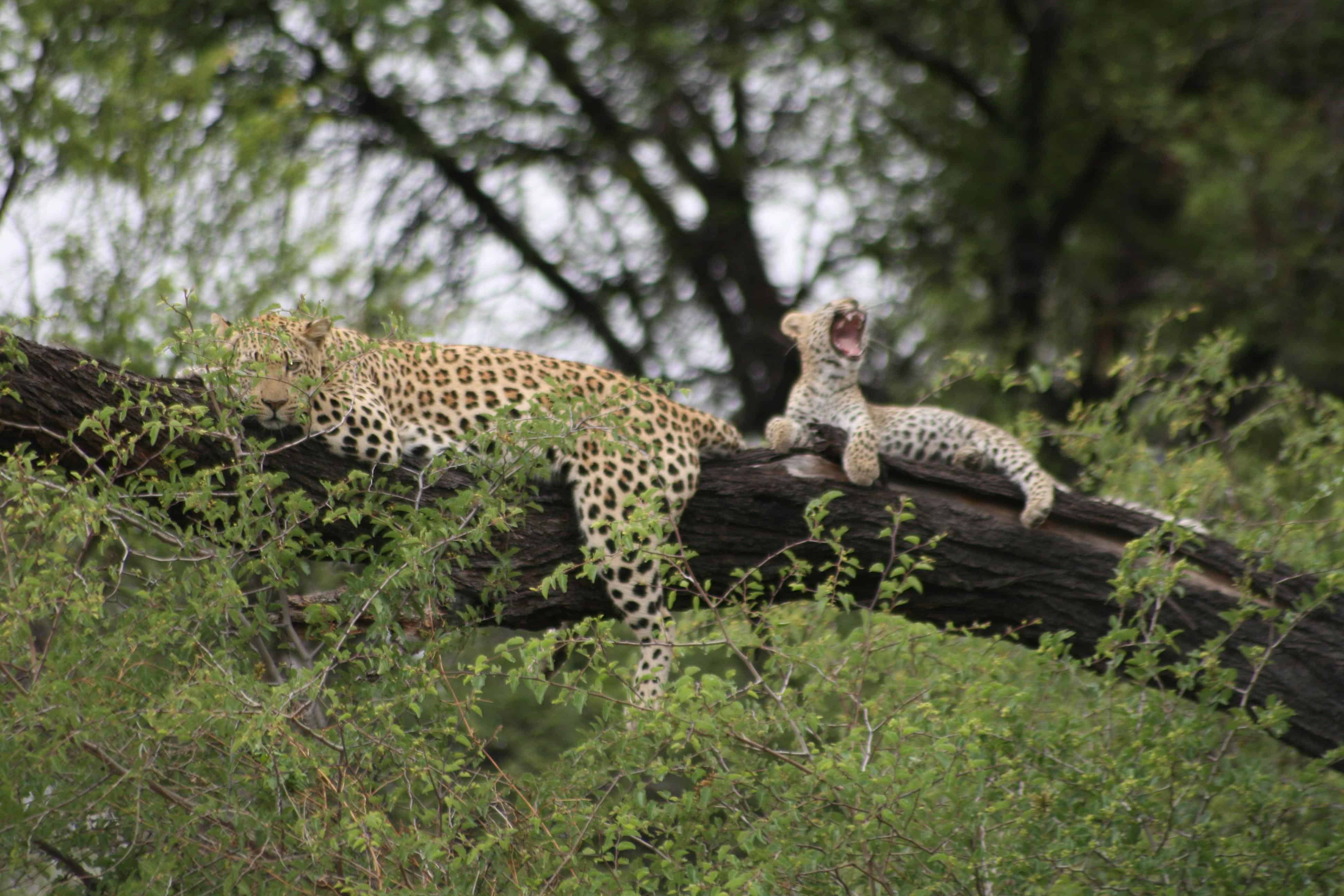 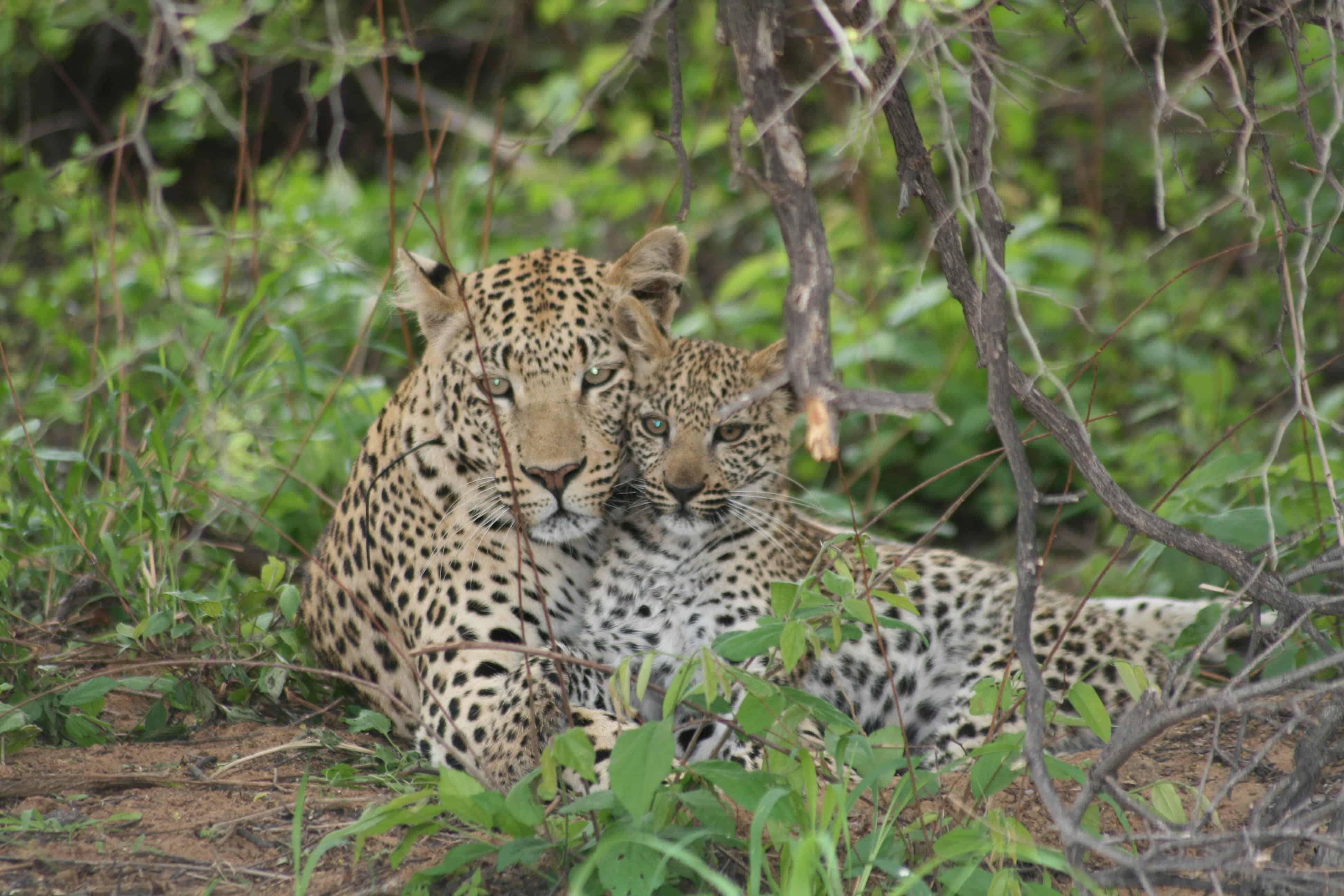 We didn’t get the chance to experience any of the other Okonjima activities before we headed back home, but there is also cheetah, hyaena and wild dog tracking on foot (no kids allowed!), a Bushman interpretive walk, three self-guided hikes inside the large fenced lodge area, a night drive and a visit to the night time hide in search of porcupine and jackal.    Okonjima has come a very long way since the early days of cheetah being petted on the lawn, and it’s a huge credit to the Hansen family that they continuously move forwards in terms of big cat research and tourism expectations.

As we drove back to Windhoek it was obvious that the rains had blessed this area with significant downpours over the past couple of weeks.  The verges were looking green, the warthogs happy and the tiny yellow summer flowers pushing their way up through the dust.

Trip report from a recent educational to the Caprivi Strip by one of our senior consultants: The Caprivi Strip is a largely unexplored part of Namibia and fairly unfamiliar to tourists. Your average tourist visiting Namibia will concentrate on the more well known highlights such as the Etosha National Park,…

Namibia's capital city, Windhoek, isn't exactly Cape Town with sprawling beaches or New York with a teeming night life. But Windhoek does have something different – dubbed as the “cleanest city in Africa” – it certainly provides a pristine environment in which to browse the many attractions including the Alte…

Earlier this week Namibia's capital city, Windhoek, had a cloud burst like I haven't seen since I was a little girl, call it better drainage, better contruction or a change in weather patterns, but I remember growing up and every rainy season you would have at least one neighbour whose…