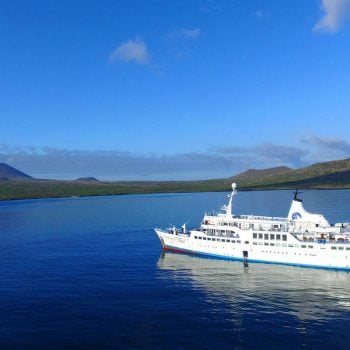 You will be picked up and transfered to the airport for your flight to the Galapagos Islands.

Upon arrival to the Galapagos Islands from mainland Ecuador, you are met by members of your vessel's expedition team at the airport. You will be transferred to your awaiting vessel for embarkation and commencement of your 4-night Galapagos Islands cruise.

Note: The cruise itinerary is subject to change without notice for various factors including but not limited to: safety, weather, mechanical breakdown, unforeseen emergencies, and the discretion of the Captain, Guide, and the Galapagos National Park. The Galápagos is a natural ecosystem, making animal encounters there ultimately unpredictable and therefore exceptional in the way they typically occur. Though Galápagos species seem to have little fear of humans, they are wild animals subject to environmental factors, including their own instincts that can affect sightings, which means these encounters cannot be guaranteed. Accepting all these factors, including adhering to the rules of the Galápagos National Park, is a condition of participation on this trip.

Types of Landings: Wet and Dry

Wet Landing: Pangas (Zodiac-type boats) cannot always make it all the way to an island’s shore because of conditions that could damage a propeller, so wet landings are sometimes necessary. A wet landing is made from as close to the beach as possible, where you will have to step out into a foot or so of water. You’ll do this by swinging your feet out over the side of the panga and then stepping into the water. You’ll reverse the procedure when you get back in the boat; sit down facing outwards and swing your feet in. You can go barefoot or wear water-sports sandals for wet landings.

Dry Landing: For a dry landing, the panga will make its way up against a natural dock of lava rocks or a man-made dock. You may wear your shoes or hiking boots. These landings may be a bit tricky because the panga is moving with the waves, and the rocks you step on are often slippery. They usually, however, have intermittent, flat portions. Your guide will offer you a hand as you disembark. When accepting a hand, grasp the guide’s wrist. The guide, in turn, will grasp yours in a “sailor’s grip” or wristlock. Once on the shore, place your feet carefully on the first few feet of rocks, which could be wet, depending on the tide level.

This afternoon, your first excursion is at Black Turtle Cove (Santa Cruz Island).

Geologically, Santa Cruz is an eroded island, with the oldest formations in the northeast. Human history here started in the twentieth century, when European and American settlers arrived between the two World Wars. The fertile soil of the tropical Moist Zones of the highlands saw the rise of the villages of Bellavista and Santa Rosa. With the settlers, however, came a great number of exotic plants and domestic animals, most of which turned feral and that then created a disastrous impact on the native species of the island. Cerro Colorado (the Red Rock) is a tectonically uplifted hill in which basaltic lava and fossiliferous tuff are layered with volcanic tuffs from the Miocene period. Santa Cruz is the home of the Charles Darwin Research Station (CDRS) and the Galápagos National Park (GNP). Santa Cruz is also the home of the largest lava tunnels in the Galápagos Islands and several reserves where you may encounter Galápagos giant tortoises in the wild.

The cove is located on the north coast of the island and is only accessible by boat. A quiet boat ride through the mangroves may reveal lava herons, sea turtles, spotted rays, and a variety of shark species, including black-finned reef sharks, white-tipped reef sharks, and Galápagos sharks. Landing: None. 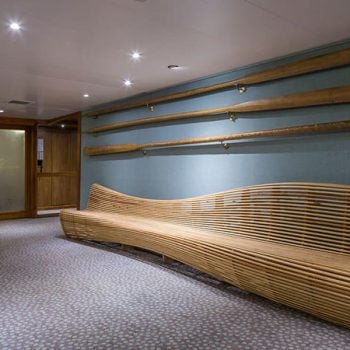 Once a favorite island of pirates and whalers, Santiago is now appreciated for its Galápagos fur seal grotto and newly plant-colonized lava flow on the southern coast. Northwest of Santa Cruz Island, Santiago Island is composed of a number of tuff cones and a central volcano. The vegetation is dense in the highlands, and a scalesia forest covers the northwest side of the volcano.

While it doesn’t boast much wildlife, Sullivan Bay provides visitors with an opportunity to walk across a recent lava flow and examine its otherworldly beauty. Don’t worry; the lava isn’t hot, as it was formed in the late 19th century. The trail here crosses pahoehoe lava, dotted with pyroclastic cones. Inland, striking red and yellow tuft cones rise above the flow. Keep an eye out for tiny molluga plants growing in the lava fissures. Landing: Dry.

Often called the geographic center of the Galápagos archipelago, Rábida is predominantly composed of scoria, a particulate material created when hot lava meets seawater. Scoria has a high iron content, giving the island a red color. Rábida’s single volcano is extinct, but it left behind a legacy: a spectacle of tall, red cliffs and a red-sand beach; which when played against the teal waters, makes this island visually stunning.

On these red sands, marine iguanas and a noisy colony of Galápagos sea lions attempt to rest in the shade of nearby caves. Brown pelicans make homes by the beach in saltbushes. Behind the beach is a lagoon where wading birds and white-cheeked pintail ducks feed. A short trail inland leads through Littoral and Arid Zone plants, such as palo santos, prickly pear cacti, and spiny bushes. Galápagos doves, Galápagos mockingbirds, yellow warblers, and several species of Darwin’s finches flitter in the vegetation, while blue-footed boobies and Nazca boobies linger in the cliffs. Snorkel along the rocks at the east end of the beach to encounter scores of near-shore and pelagic fish. Landing: Wet. 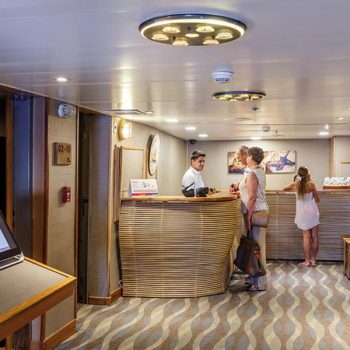 Isabela is the largest of the Galápagos Islands, with more than half of the land surface area in the archipelago. It is made up of six volcanoes (Alcedo; Cerro Azul; Darwin; Sierra Negra; Wolf, which has the highest summit in the Galápagos at an elevation of 5,600 feet; and Ecuador, an extinct volcano that has been destroyed by erosion and wave action) that are joined by extensive lava flows. Along with Fernandina Island, it is one of the most volcanically active spots on earth. The Equator passes through both Ecuador and Wolf Volcanoes.

More wild giant tortoises live on Isabela than on any other island in the Galápagos. Isabela’s large size and volcanic topography created barriers for the slow-moving reptiles; they were unable to cross the lava flows, causing several different sub-species of tortoise to develop. Today, Galápagos giant tortoises roam free in the calderas of Alcedo, Cerro Azul, Darwin, Sierra Negra, and Wolf Volcanoes.

A trail leads away from the beach and into the arid zone of the island. Here you may encounter large land and marine iguanas and giant tortoises. Closer to the water you may see flightless cormorants. The most unique feature here is the miles-long stretch of coral reef jutting into the air – a result of a major uplift in 1954. Landing: Wet.

Early pirates and whalers frequented Tagus Cove and some even wrote their names on the cliffs along the shore. A short steep hike leads to Darwin Lake, which is comprised of salt water and lies within a tuff cone. It is a good place to spot a variety of land birds such as ground and tree finches, hawks, yellow warblers, large-billed flycatchers and, occasionally, woodpecker finches. A panga ride along the cliffs may reveal flightless cormorants, Galápagos penguins, and Galápagos sea lions. Landing: Dry (with slippery rocks). 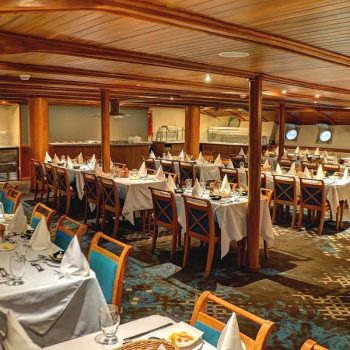 Visiting Fernandina is like seeing the Earth when it was brand-new. The most westerly of the Galápagos Islands, Fernandina is the youngest and most active volcanically, with eruptions occurring from its single volcano, La Cumbre, every few years. Lava fields extend from La Cumbre’s base to the ocean, and both types of flows — `a`a (pronounced “ah ah”), and pahoehoe — can be seen. Fernandina is literally land-in-the-making.

Here you may see some of the most unique Galápagos species: flightless cormorants, Galápagos hawks, Galápagos penguins, and the largest colony of marine iguanas in the islands. In 1994, Espinosa Point was raised between two and three feet by tectonic uplift, leaving the landing dock inaccessible except at high tide. Landing: Dry.

At Vicente Roca Point in the north, remnants of an ancient volcano form two turquoise coves with a bay that is well protected from ocean swells. This is a popular anchorage from which to take panga rides along the cliffs that are the volcano’s remains or to explore a partially sunken cave at the water’s edge. Blue-footed and Nazca boobies perch along the sheer walls, while flightless cormorants inhabit the shoreline. Landing: None. 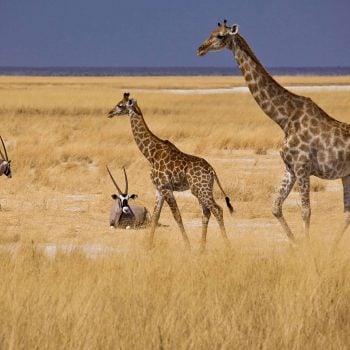 You will be picked up from your hotel and transferred to the airport for your flight out of Ecuador.

Land Arrangements Do Not Include

• Any form of Travel Insurance
• International Airfares, unless noted otherwise
• Any costs associated with obtaining passports and entry visas, Immigration Reciprocity Fees and other border fees
• Any arrival or departure airport taxes to be paid directly at airports, unless noted otherwise
• Any airline Checked Baggage or Excess Baggage fees
• Gratuities of any kind
• Meals other than those specified in the itinerary
• Beverages unless noted as included in the itinerary
• Any meals for your guide if you invite him/her to dine with you
• Any sightseeing or optional excursions not included in the itinerary
• Personal expenses such as laundry, communication charges, Internet access fees and any other forms of hotel incidentals

The Secrets Of Morocco